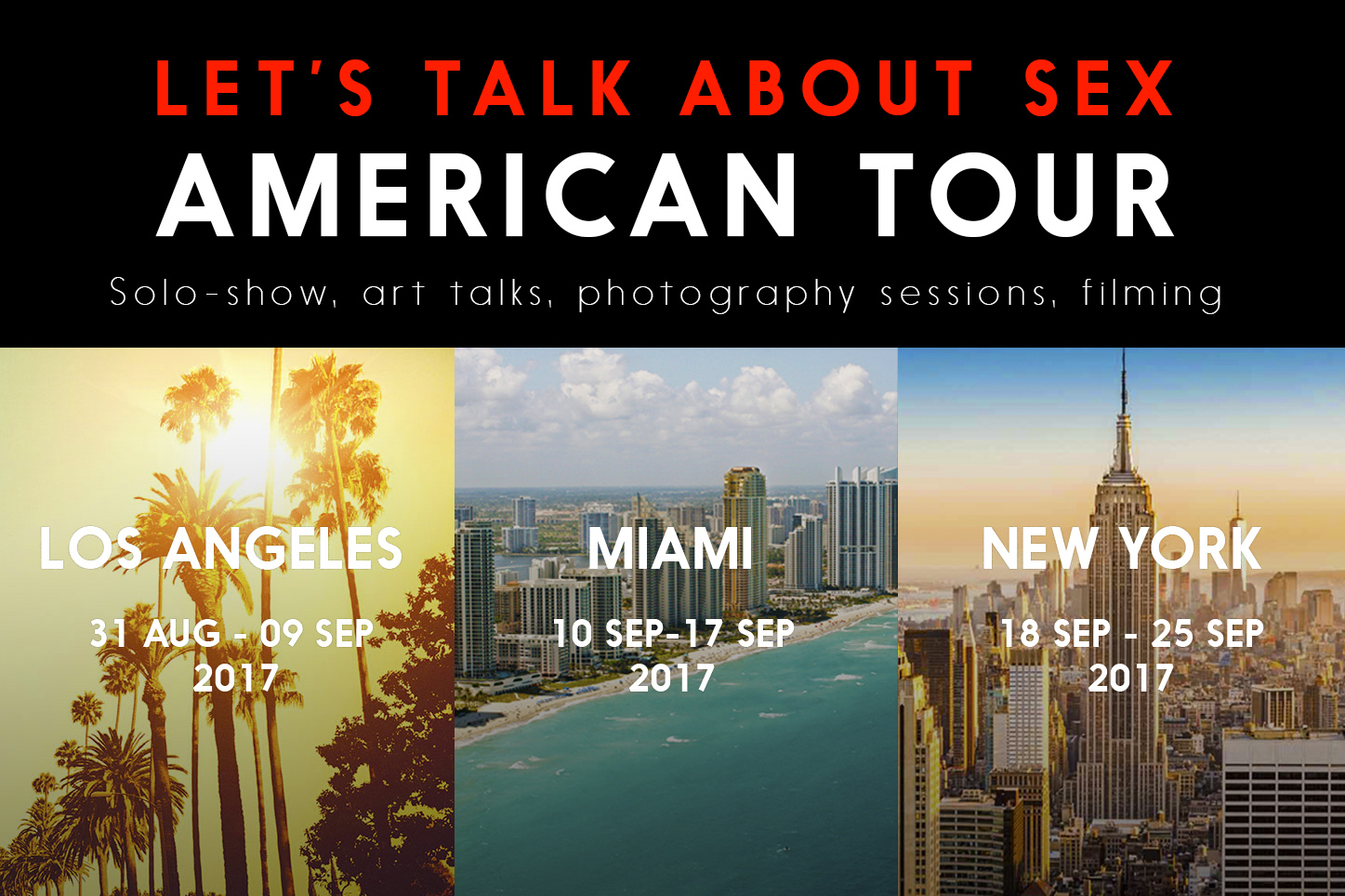 Announcing my upcoming US tour! I have been planning a month-long tour of America for some time, and now it’s finally here. I will be in Los Angeles, Miami, and New York during the month of September.

Here’s a taste of events confirmed so far:

We are all surrounded by sex. But do we ever question our own perceptions about it? Does everyday sexual imagery bring us any closer to self-discovery or does it only serve to uphold the male gaze? A new female gaze is needed to confront issues of sex and sexuality in today’s age of simultaneous media-saturation and censorship.

Aleksandra will share how her exploration of Alfred Kinsey’s sex research led her to photograph over 200 strangers and discover their unique stories and thoughts about sex. She will discuss her journey of discovering how different cultures and social backgrounds inflict moral values on our sexuality and body image.

Helen Pena will discuss how sex is perceived in Miami culture from the female perspective. She will share her experience working with young local female artists/influencers and how they are using their social profiles as platforms to reclaim their sexuality in a city where female sexuality is often viewed from the male lens.

Aleksandra Karpowicz presents ‘SEXPOSE,’ an audio-visual experience including screening of ‘Definition of Sex’ and participatory photo session for the third version of her awards-winning photography project, ‘Let’s Talk About Sex’.

The ifilm will feature 8 short art videos, each presenting a different audio interview. The interviewees, models who previously participated in my ‘Let’s Talk About Sex’ photography project, share their personal thoughts and stories on sex.

‘Definition of Sex’ shares individual narratives, but its aim is to reinterpret the meaning of sex itself. Sex has a number of definitions and can mean something different to everyone. Even though each participant responds to the same brief, no story is alike. This artwork emphasizes how different everyone’s perception of sex can be, and shows how diverse people are.

The idea for this installation draws from the hundreds of stories I heard from my models during the process of creating the photography projects ‘Let’s Talk About Sex’ I & II.

‘Let’s Talk About Sex’ is an ongoing psychological-photographic experiment. The project is inspired by Alfred Kinsey’s famous report on human sexual behaviour. His books ‘Sexual Behaviour of the Human Male’ and ‘Sexual Behaviour of the Human Female’ are at the core of the project, in addition to research by other academics in the field of the Human Sexuality. The literature and the data they disseminate provides a unique insight into how people behave sexually, which is determined by factors including gender, age, sexual orientation, background, and religion.

Initially, the expectation of the project was only to take photographs. The photo-shoot for ‘Let’s Talk About Sex’ involved participants engaging in the psychology of role-play which allowed me to capture emotions, desires, or preferences hidden in their subconscious. The interview material prior to the photo sessions, however, became just as important and relevant to the project; participants wanted to share their stories and felt the need to be heard. As a result, a selection of the volunteers came back for further interviews that were audio recorded. Each interview varies in length, lasting between 4-6.5 minutes.

If you are interested in participating in the ‘SEXPOSE’ photo session to become a part of the artwork, please email RSVP at ak@akarpowicz.com.

THE FEMALE GAZE: PERSPECTIVE OF THE SEXES IN ART & PHOTOGRAPHY

What is the female gaze and why do some people treat it as a movement? Do we need the female gaze to confront issues of sex and sexuality in today’s age of simultaneous media-saturation and censorship? A panel discussion exploring the concept of female gaze in art and photography. Aleksandra Karpowicz, a London based artist, will share her experiences of working on the project ‘Let’s Talk About Sex’, which won two Awards at the National Open Art Competition UK.​
24 September | New York : Photo Session for ‘Let’s Talk About Sex III’

If you are interested in participating in the photo session to become a part of the artwork, please email RSVP at ak@akarpowicz.com.